Breathing in, Breathing Out – For Paris 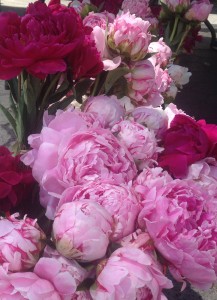 My heart is heavy. All week long I have been glued to my computer, scrolling through the New York Times and Facebook.  Since the demise of my TV last week, they have been my source of information about the state of the world and of my nearly 5000 “friends” from around the world. I have read countless articles about the events in Paris, about ISIS and Islam and many editorial opinions about what we should do and should not do to combat terrorism.  I have cried watching videos – of Syrian children sleeping by the sides of roads, of a 3 year old girl holding up her hands because she thought the photographer’s camera was a gun and of a French boy of about the same age worrying that his family would have to move because of the mean bad people with guns until being reassured that ‘les fleurs and les bougis” (flowers and candles) would protect them as he and he father looked at the piles of flowers and candles left in memory of the victims.

If my TV hadn’t died I probably would have been watching scenes of horror,  interviews with survivors and bios of the deceased like I did for days after 9/11 until my then 12 year old daughter told me to ‘turn it off and stop it,” letting me know it was time for me to get a grip, return to the here and now and be a mom to a daughter who was very much alive.

Most of my ‘friends’ on Facebook are peaceable but there were a fair share of “bomb them out of existence”, “close the borders”, and “seek vengeance” comments, reminding me that world events, not unlike minor skirmishes on shopping lines and at the DMV are experiential Rorschach tests. How we react speaks volumes about how we see the world, our coping strategies and the kind of world we are, with our very thoughts and actions birthing into existence.

At every juncture,  there are only two choices – love or fear (hate being a bi- product of fear). In a Native American story, a grandfather tells his grandson that inside of each of us there is a battle raging between two wolves – one standing for greed, hatred, vengenace and power and the other for love, well-being, compassion, generosity and joy. Looking worried about the gnarling of jaws and the battle to the death, the grandson asked: “Grandfather, which wolf wins?” Grandfather replied, “The one you feed.”

Someone told me that at fire drill at a government building the other day  staff rushed out of the building in fear that the alarm signaled a bomb attack by ISIS and shortly afterwards a friend who has just moved to Florida and has not had cable installed, told me that he’d had no idea what had happened and had been peacefully sitting by the water fishing oblivious to what was happening across the pond.

With all this swirling around in the news and in my head I am focusing on how to still my throbbing heart and tap into that peace that passeth all understanding and at the same time to make the kind of difference that doesn’t require guns and bombs and armies, panic buttons and mass hysteria and promotes peace, love and understanding.

Pema Chodren, a Buddhist nun, has been my go to person for this kind of help for a long time. Here’s what she has to say:

“We awaken this tenderness for life when we can no longer shield ourselves from the vulnerability of our condition, from the basic fragility of existence. In the words of the sixteenth Gyalwa Karmapa, “You take it all in. You let the pain of the world touch your heart and you turn it into compassion.”

She goes on to describes a meditation practice know as Tonglen which has served me well in my work and in my life. It seems particularly and poignantly called for right here and right now.

I join Pema in saying: Let’s do Tonglen for a world that is falling apart.

“Sitting comfortably with the spine upright, you breathe in and on this in-breath, you breathe in whatever particular area, group of people, country, or even one particular person is suffering. Maybe it’s not this more global situation, maybe it’s breathing in the physical discomfort and mental anguish of chemotherapy…. Or maybe it’s the pain of those who have lost loved ones, suddenly or recently, unexpectedly or over a long period of time, someone dying.

And then you send out—I often say just relax out—and send enough space so that people’s hearts and minds feel big enough to be able to live with their discomfort, their fear, or their anger or despair, or their physical or mental anguish. But you can also breathe out for those who have no food and drink. You could breathe out food and drink. For those who are homeless you could breathe out—send them shelter. For those who are suffering in any way, you could send out safety and comfort.

So with the in-breath you breathe in with the wish to take away the suffering, and you send out with the wish to send comfort and happiness to the very same people, or animals, or nations, or whatever it is you decide.

Breathe in again with the wish to relieve their suffering, and on the out-breath sending them relief. And just keep breathing in, deeply, and breathing out, taking in as fully as you can, radiating out as widely as you can.

You could do Tonglen for people you consider to be your enemies— those that hurt you or hurt others. Do Tonglen for them, thinking of them as having the same confusion and stuckness as your friend or yourself. Breathe in their pain and send them relief.

As you do the practice, gradually over time, your compassion naturally expands and so does your realization that things are not as solid as you thought. As you do this practice, gradually at your own pace, you will be surprised to find yourself more and more able to be there for others even in what used to seem like impossible situations.”

When asked if we should pray for Paris the Dalai Lama said:

“People want to lead a peaceful lives. The terrorists are short-sighted, and this is one of the causes of rampant suicide bombings.

We cannot solve this problem only through prayers. I am a Buddhist and I believe in praying. But humans have created this problem, and now we are asking God to solve it. It is illogical. God would say, solve it yourself because you created it in the first place.

We need a systematic approach to foster humanistic values, of oneness and harmony. If we start doing it now, there is hope that this century will be different from the previous one. It is in everybody’s interest.”

As we are tempted to hit the panic button, to rush to judgement and allow fear to run the show or to bury our heads in the sand, there is nothing more important than to stop, breathe in and connect with the suffering of others and with our own suffering and as we breathe out to fill our hearts and the world with compassion, harmony and the truth that we are all in this together, are one big family – ONE LOVE