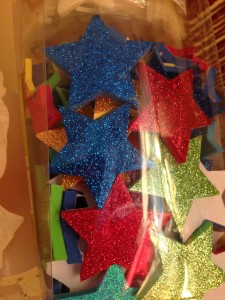 After weaving pine boughs into giant screens that fit into the large panels of the balcony in the cathedral-like St. George‘s Church on 16th Street in lower Manhattan, the church went dark and so silent you could hear the congregation breathing.

As my godfather, the organist Charles Henderson, sounded the first notes of We three kinds of Orient Are on the massive pipe organ E. Power Biggs had played on, an illuminated star started its slow, steady ascent from the nave all the way up to the dome above the alter – taking enough time for us to sing all the verses of the hymn. Mesmerized, we sang to the star – star of wonder, star of light, star of royal beauty bright…. Guide us to thy perfect light. By the time the star had risen the church had gone from darkness to a rich golden celestial glow.

I osmosed the magic of that scene and long after I had stopped going to church – drawn into the secular, culturally jewish world of my father and of the small private school where I attended bar mizvah after bar mitzvah – the thought of it warmed my heart.

Years later, working at Everything for Everybody – a soup kitchen and emergency shelter in the meat market district of the city – I based a Christmas eve play on those memories – deepening and elaborating on them to create another equally heartwarming memory – the glow of which remains with me to this day as part of my Christmas treasure trove – stored in my mind-heart the way my holiday decorations are stored in their plastic tub until I haul them out each December.

The store front, that was the first Everything For Everybody, had long lunch counter running down it’s center with free clothing shelves lining one wall and signs reminding us to “Feed the hungry, Clothe the naked and Shelter the homeless” and that “He who does not work shall not eat“ posted in between giant pots and pans filling the wall facing the lunch counter.

It was the open area at the end of the counter that we turned into the manger. We had a real baby whose mother was Mary for the evening. Farouk, the fluffy white terrier – our mascot – played the sheep and George, a white haired gentleman who had gone from homeless to our grandfatherly caretaker was Joseph. The three kings were in attendance and a few motley shepherds circled the baby.

It was standing room only. All seats at the lunch counter were filled with our soup kitchen regulars with white coated workers from the meat markets, neighbors, guests, curious passersby and staff members perched on the free clothing shelves and crammed every available nook and cranny. The lights went out and from the little office off to the side, I started to play We Three Kings of Orient Are on my recorder.

As people halting started to sing the first verse, my friend Margaret, from Vancouver, slowly hoisted the tree topper star that I’d bought at Woolworths and had threaded through a hook in the ceiling earlier that day. Illuminated and shimmering it bathed the manger in a golden glow – just like it had at St. Georges Church and just like it lit up the sky in Bethlehem and just like it does tonight. As the recorder sang it’s sweet song, people joined in, Farouk barked, the baby cried and a homeless guy came in looking for a bowl of soup and bed for the night following after Mary, Joseph and the baby. No one was turned away.

A few years ago I attended a coaching workshop in Vancouver and I looked up my friend Margaret. She came into the city and we spent the night in my hotel room drinking wine, munching on goodies and catching each other up on the decades of our lives since our gogo dancing days in Montreal. She told me that the Christmas she had spent in New York City with me at Everything for Everybody was way up there on her list of best Christmas’ ever. She reminded me (for I had forgotten) that she was crouched with me in the darkened, cramped office space slowly raising the star as I played the recorder and the dog barked and the baby cried and the scene that is the Christmas story was replayed for real in that then deserted area of the west village at the soup kitchen, emergency shelter and so much more that was Everything For Everybody.

Fast forward 40 years. People from the middle east are following stars looking for a room at the inn of the heart of the world, wandering from one place to another seeking shelter, for a chance to be reborn and for peace on earth. We are still called to feed the hungry, clothe the naked and shelter the homeless. Everything has changed and nothing has changed.

The holidays are here and, while many are gearing up for parties, family gatherings and celebrations, others are feeling lonely, discouraged, stressed out and depressed.

Be an angel.  Take a moment to offer a hand, give a hug, invite someone to dinner, reach out and remind someone that you truly see them and care. Include them in your circle of love. You may save someone’s life including your own.

While the tall order of Everything for Everybody is still being filled, remember that what you do for anyone you do for everyone. There’s no better time than now to put the One Love principle into action, Reggae and every other version.

It is with great love that I wish you all a Merry Christmas and in the spirit of the season – whatever tradition you embrace –  may we all join together in welcoming the return of the light to the world as we emerge from the depths of the darkest of days.

3 Responses to Star of Wonder