Living Life One Tune at a Time

If the world were like The Maine Fiddle Camp all would truly be well.  The ingredients in the recipe for a most amazing week,  were the same ingredients that make the world my happy place: community, generosity, diversity of age and abilities all hanging out together, music, music, music, lovingly prepared, fresh, healthy food, a common purpose (music and fun), compassion, tolerance, empathy, encouragement, silliness, learning new things, practicing old things, continuity (people keep coming back year after year), a beautiful environment with a natural back drop equivalent to our tropical paradise, pretty good weather and a lightness of spirit that oozed everywhere bathing the whole shebang in a golden glow even on the couple of overcast days and especially for the most dramatic mid-night thunder storm I may ever have slept through.

I am already planning on returning next year and thinking that I’ll stay for both of the two week sessions. I made good friends, many acquaintances and tens of warm, musical, friendly connections throughout the 5 days. I learned to play a handful of fiddle tunes and to recognize a host of others, was continually awed by the talent, the sheer fiddle wizardry and the beautiful, heartfelt tunes.

I fell in love with the little kids and melted when I realized that the beautiful, pregnant teacher – mother of the 3 and a 4 year olds strutting around with the tiniest violins I’ve ever seen – had been brought to camp by her parents – also teachers at the camp, when she was that age. While no one sang “May the Circle be Unbroken” – that’s what it felt like.

I roomed with 8 girls under 18 and their 21 year old ‘house mother’. They were adorable. I didn’t get too involved, preferring to say sweet dreams and slip into my coleman sleeping bag like a baby roo to conk out till morning. I covered for the house mom so she could slip out and jam after 11:30 – the under 18 curfew. She told me the last night of camp was the night they were most likely to sneak out. She sounded like she knew what she was talking about as she tip toed out with her fiddle into the night.

Grandparents brought their grandchildren and 3 generations of a family from Quebec had driven down from Montreal to play music together all week. There was the Boston Symphony Orchestra violinist who spent the week with her 10 year old son and niece playing fiddle tunes, a vacation from the pressure and repertoire of the symphony; the photographer from New York with his 15 year old daughter, a guy from Maine with his 7 year old daughter, French Canadian retired professors and a surveyor who just started playing the fiddle a year ago and was so intent on learning and getting better you just wanted to help him, so we played tunes together after the class – hammering the tunes into our heads by repeating them over and over and over and over again so I’d fall asleep with The Wren or the Spotted Pony playing me to sleep like lullabyes.

It was deeply moving to watch the high school students of the Farmington Fiddlers perform and to watch the 85 year old master fiddler who showed up to fiddle and call the evening dance and to sing along with the under 8 year olds. It was so hopeful and uplifting and it was really happening.  I was there.

Is it naïve and unrealistic and whoo whoo of me to believe that it is possible for people to live together in peace, love and harmony?  Am I just an old hippie who never grew up,  an Anne Frank who believes, that despite everything, that people are essentially good at heart?

Because I am human and because I’m a healer who’s in the business of being present to and helping transform suffering,  I am acutely aware of all the stuff that gets in the way of peace, love and understanding. I have also come to know that that stuff can be seen for what it is, expressed in ways that do not cause harm and little by little or all at once cleared away and released. There are so many tools to help us get and stay connected to source (God, the divine, inner guidance, higher power, however you choose to see it) and to cut through the old tapes that hang us up and run the show from behind the scenes.

Fiddle camp gave me a chance to be part of a world that I want to be a part of in a way that felt so good and natural that it was a shock to be jolted back to the version of reality on the evening news when, after leaving camp, I was sitting at my friend’s kitchen table: Ferguson, the beheading, the Israeli/Palestinian horror. The contrast was glaring and I wondered how I was going to hold onto the glow, the promise and the music as I re-entered the denser atmosphere of everyday life in paradise. 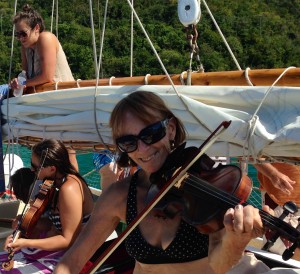 One Tune at a Time

As I debrief and consider which threads I want to pull into the tapestry of my life and how to pull it off, instead of getting overwhelmed and frustrated I strap my violin onto my back and like the true companion it has been for weeks, take it with me on my travels. When I have a break, I head out toward Cabrita Point, pull over onto the beach and learn a new fiddle tune – yesterday 100 Pipers. I play it over and over and over again to get the tune into my head, my fingers and my heart as the waves lap the shore, taxi men eat their lunch and kids frolic in the turqouise sea.

Here’s to holding a vision for what’s possible and living it into existence – one tune at a time.

7 Responses to Living Life One Tune at a Time